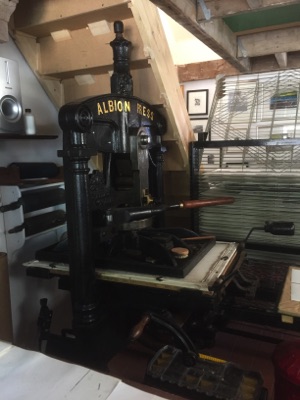 The press was purchased new in 1869 for the Failsworth Free Press (near Manchester) it was used for proofing.

The great great great uncle of the last owner purchased the press new in 1869 and in 1980 the press was found deserted in a store room in the original building of the press which was undergoing modernisztion.

The last owner bought the press and moved it to Wales, ( after all it was a familly heirloom).

Circumstances changed and the press was no longer used. I spotted the advert and made a sucessful bid in December 2014.

After a round trip of 580 miles the press arrived back at Bracken Press and the above restoration was undertaken.

I'm only the 3rd owner of the press from new, one piece that was missing from the press is the frisket, so that's the next job to complete.

Taken apart and on the workshop floor

The main frame and head piece

The main frame after painting

The head piece after painting